The Russian Academy of Sciences (RAS)’ Far East Division held a press conference and a roundtable discussion on Vietnam-Russia relations in Moscow on June 26. 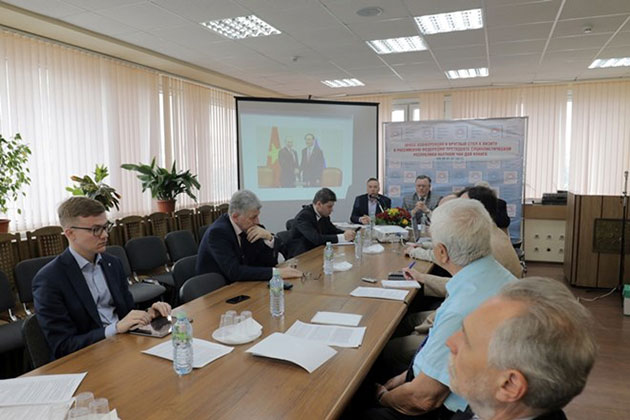 Taking place on the threshold of President Tran Dai Quang’s official visit to Russia, the events gathered leading scholars, experts and representatives of news agencies from both Russia and Vietnam.

Participants discussed all aspects of Russia-Vietnam relations, from cooperation in politics, trade and military science to factors affecting the bilateral relationship.

Speaking at the discussion, Evgheny Kobelev, a RAS expert in politics, said relations with Vietnam are a priority in Russia’s foreign policy toward Asia.

A theory on the policy set out in May 2012 considered Vietnam among the three most important partners of Russia in Asia alongside China and India.

Kobelev detailed highlights of the partnership in politics and diplomacy based on their similar views on pressing international affairs, particularly cooperation in Southeast Asia and in Asia-Pacific.

Vladimir Mazyrin, Director of the Centre for the Study of Vietnam and ASEAN at RAS Far East Division, said Russia’s position in the Vietnamese market has weakened in recent decades.

He attributed the trend to more global economic powers entering the country and Russia facing a trade embargo from the West.

According to the researcher, despite this context, the two economies still have advantages for economic cooperation as they are both leading cereal producers in a world of increasing population and food security concerns.

He suggested the two countries work with developing nations to build a cereal production alliance.

Mazyrin stressed that the free tradeagreement between Vietnam and the Eurasian Economic Union, which took effect in last October, will also help accelerate Vietnam-Russia trade and investment ties.

President Tran Dai Quang is scheduled to begin a four-day official visit to Russian on June 28, after concluding his trip to Belarus./.