Environmental damage in central coasts to be assessed

The Vietnam Environment Administration (VEA) under the Ministry of Natural Resources and Environment will focus on evaluating the damage to the sea environment and ecosystem in four central provinces from Ha Tinh to Thua Thien-Hue and propose solutions to solve the pollution and restore the maritime environment. 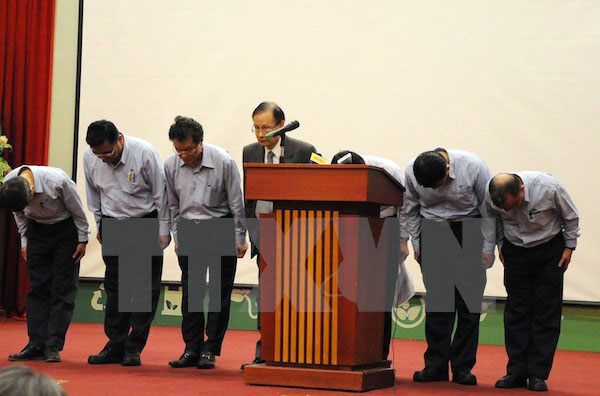 The target was set during the administration’s conference on July 21 to review its performance in the first half of 2016 and implement tasks for the rest of the year.

Until the end of this year, the VEA will complete a comprehensive inspection report on Hung Nghiep Formosa Ha Tinh Steel Co. Ltd whose untreated waste discharge caused the mass fish deaths along the coasts of Ha Tinh, Quang Binh, Quang Tri and Thua Thien-Hue provinces.

It will file a draft resolution on measures to handle Formosa’s violations with specific penalties as well as plans to monitor the enforcement of the punishments. The document will also be contributed by the Ministries of Public Security and Justice and relevant agencies.

A project will be conducted to assess the level and scale of pollution as well as the extent of degradation of the ecosystem and organism resources in the affected waters. A marine environment monitoring system will also be installed to ensure the protection of the maritime environment in some central coasts.

Meanwhile, the administration will recommend the formation of a national plan to cope with environmental incidents, together with a national committee to deal with urgent cases.

At the same time, major waste discharge sources to rivers and sea will be closely supervised.

The Humane Tết programme in the Spring of Cat 2023