Vietnamese people’s warm welcome for Japanese Emperor Akihito and Empress Michiko made headlines in many Japanese newspapers on March 1. 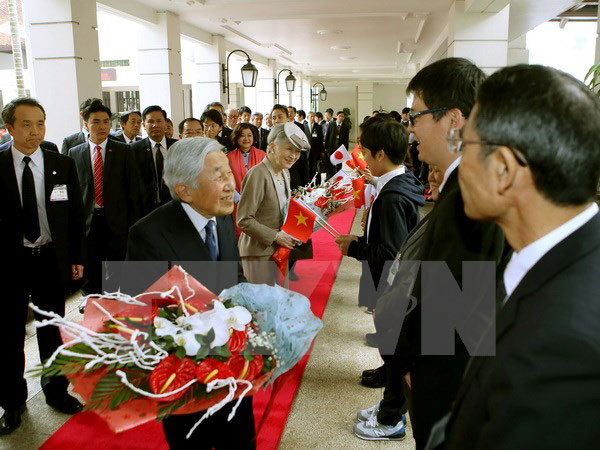 Machini newspaper ran a photo of the duo received by Vice President Dang Thi Ngoc Thinh at Noi Bai airport on February 28, together with the full text of the Emperor’s statement on his Vietnam visit.

In the statement, the Japanese Emperor expressed hope that the visit will strengthen mutual understanding and relations between the two nations.

Meanwhile, Asahi newspaper on March 1 ran an article entitled “Friendly visit of Emperor and Empress to Vietnam”, quoting Prime Minister Nguyen Xuan Phuc as saying that the visit is a historical event that opens a new chapter in bilateral ties.

During its news programe on February 28, Japan’s NHK Television aired the welcome ceremony for the Japanese guests in Noi Bai airport, while revealing that during the six-day visit, the Japanese Emperor and Empress will perform exchange activities with Vietnamese people.

On March 1, Yomiuri and Asahi newspapers reported that on their first day in Hanoi, the duo will meet 26 members of the Japan Overseas Cooperation Volunteers programme in Vietnam.

At the same time, Japan Today newspaper noted that Japan is the largest official development assistance provider and leading trade partner of Vietnam.

It quoted a statement from the Vietnamese government emphasising that the Japanese Emperor and Empress’s visit is of symbolic significance and a historic milestone in Vietnam-Japan relations.

The visit reflects Japan’s interest in the nation and people of Vietnam, it said.

The Japanese Times revealed that during the visit, the Emperor and Empress will meet families of Japanese soldiers who chose to stay in Vietnam after World War II, as part of efforts to heal war pains and strengthen friendship between the two countries.

Earlier on February 28, local media in Japan reported a ceremony to see the Japanese Emperor and Empress off, which was attended by Prince Naruhito, Prime Minister Shinzo Abe and members of the Royal family and Japanese Government.

Earlier in January, Japanese PM Shinzo Abe made his third visit to Vietnam./.