The 780-metre concrete dyke was put into use in Hoi An ancient town, the central coastal province of Quang Nam, on March 21 as part of measures to protect the UNESCO cultural heritage from severe erosion. 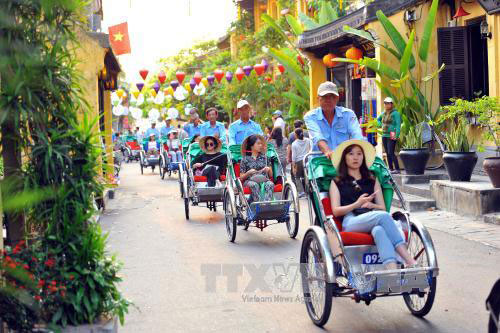 It was an urgent project to strengthen the Hoai River bank road, from Japanese Covered Bridge Pagoda to Cam Nam bridge.

The construction work, which started in November, 2015, included river-bed dredging, and upgrade of pavements, drainage and lighting systems.

The work used a total of 136 billion VND (6 million USD), of which 80.4 billion VND (3.5 million USD) came from the Support Programme to Response to Climate Change (SP-RCC) and the remainder from the local state budget.

Nguyen Van Dung, Chairman of the Hoi An city People’s Committee, said that the project aims to prevent storms and floods while ensuring safety for ancient architectural works and local people.

Erosion was alarming in Hoi An since 2009 with 20 hectares of Cua Dai beach having been washed away.

Hoi An is home to 7 kilometres of coastline.

It was recognised as a world heritage site by UNESCO in 1999./.

In response to the national e-commerce week and online Friday