Vietnamese women who are unable to breast-feed their children for health reasons are increasingly using donated breast milk from other women, sparking warnings from physicians. 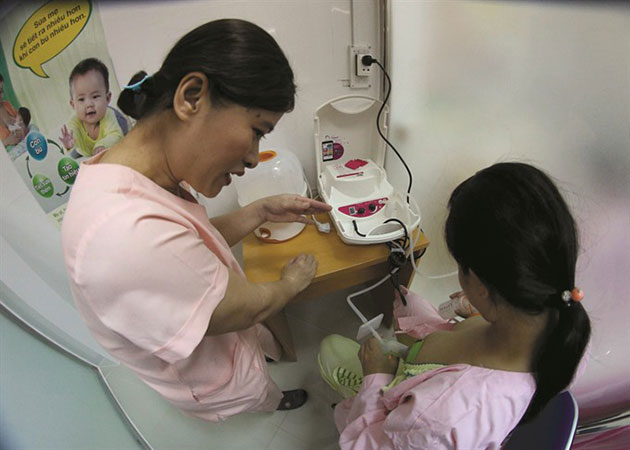 Healthcare staff at the Da Nang Maternity and Paediatrics Hospital is instructing a mother who wants to give breastmilk with a pumping machine (Photo: VNA)

Some mothers cannot breast-feed their children for various reasons, including the use of antibiotics taken after delivery.

Le Huyen Trang, a woman from Tan Binh district, has set up a free “breast milk fridge” promoted on Facebook. Donors and recipients of breast milk can post their requests and information.

Every day, Trang receives between 60 and 80 breast milk bags with 250ml of milk from donors.

However, after reading media reports about the practice, Dr Truong Huu Khanh, head of Paediatrics Hospital 1’s infectious and nervous diseases ward, said: “It’s impossible to do this. It’s not like giving free rice or bread. Frozen breast milk from mothers should be used for their child only.”

Safety of a “breast milk bank” should be ensured, just as it is for a blood bank, Khanh said.

“It’s not sufficient to listen to donors who say they are healthy and have no disease. They must be tested for safety reasons,” he said.

Khanh said that opening and closing a fridge could also cause bacterial contamination.

At a recent press meeting, nutritionist Hoang Thi Tin of Paediatrics Hospital 1 said that breast milk from other mothers should not be encouraged.

Babies could be at a high risk of getting an infectious disease, Tin said.

Unfrozen breast milk must be used within two hours, she said, adding that milk bottles should be stored in the middle of a fridge’s freezer.

Frozen milk at minus 70 degrees Celsius could be stored for around a year, she said.

Tu Du Obtetrics Hospital recommends breast feeding as a preferable source of nutrition for infants instead of formula milk.

For premature babies with a digestive disorder or born with low weight, breast milk can be vitally important.

These newborns, however, are usually kept in a special room at hospitals away from the mother and most of them are fed formula milk, which can cause digestive problems.

But doctors at Tu Du Obtetrics Hospital said breast milk could be contaminated with HIV, hepatitis B or C viruses. Patients with these diseases often do not have symptoms in the early stages of the disease and, as a result, affected mothers could pass along contaminated breast milk.

Moreover, techniques and devices for milk are sometimes not clean and storage is improper.

It is important to control the quality of donated breast milk by keeping it under surveillance by health experts and sterilising it, according to the American Academy of Paediatrics.

Mothers eligible to donate breast milk are tested to detect infectious diseases, and they should not smoke, drink wine or take any medicine that could affect the quality of the milk. They are also given instructions to ensure that the milk is not contaminated.

Donated milk is tested twice and is sterilised at a very high temperature.

Milk that tests negative for bacteria or viruses is stored in a fridge for later use./.