Damage in Can Tho city fire estimated to worth $13 mil

On March 27th, Rescuers in Can Tho city faced difficuties when they tried to move all machines, equipment, furnitures of Kwong Lung Meko Company out of its building as the flames re-ignited on the fifth floor. 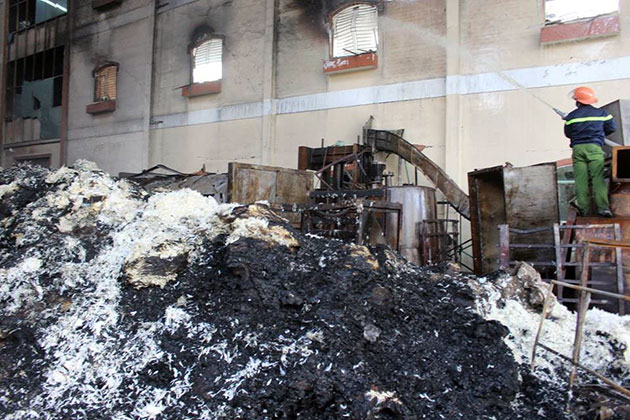 All items on the fifth floor are destroyed. (Source: VietNamNet Bridge)

Fire fighters could not access to the fifth floor because of heat fierce.

Finally, rescuers form fire fighters and military had to destroy walls of the fifth floor to move furniture, materials and commodities.

Chairman of the Can Tho People’s Committee Vo Thanh Thong said that related agencies and insurance companies will work to assess the damage.

As per the company’s initial report, it is estimated that the fire costs $13 million including $6 million of machines and equipment.

Luckily, the company signed a fire insurance contract with a foreign company in January 2017.

Along with the investigation of the fire cause and damage assessment, the urgent matter is to restore operation.

Lam Van Loi, head of the company’s Personnel Room, said that at first 350 workers will work in the second factory in O Mon District and the company will hire Viet Tien Meko’s warehouse where workers will fulfill the orders.

In the afternoon, Binh Thuy District leaders presented gifts to poor workers who are affected by the fire. Each gift is worth VND350,000.

Prime Minister Nguyen Xuan Phuc has asked the Ministry of Public Security to find out the fire cause and increase monitoring in fire-prone places to prevent the incident.

He also requested Can Tho City People’s Committee to urgent remedy the consequences of the incident, support the company and laborers.

Kwong Lung Meko Company is located in Tra Noc Industrial Park which is one of the most dynamic industrial parks of Can Tho City./.