The central city of Da Nang started construction of a tunnel at the junction of Dien Bien Phu, Nguyen Tri Phuong and Le Do streets, one of the busiest roundabouts in the city, on December 29. 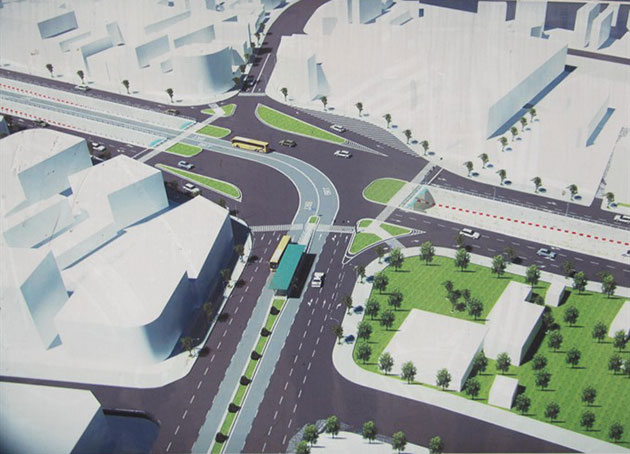 A layout of the road-tunnel project. A main underground section of the tunnel will be built at the corner of Dien Bien Phu and Nguy​en Tri Ph​uong streets (Photo:VNA)

It will be the second such road project after a tunnel at the West Han River bank traffic intersection commenced construction in October.

The road tunnel project, which is included in the World Bank-funded sustainable development project with a total investment of 220 billion VND (9.77 million USD), will replace the current ground-level intersection by a system of 160m-long open air tunnels and 80m underground tunnels. There will be two lanes for Bus Rapid Transit along with another two lanes.

The project, which covers 48,000sq.m, will help ease traffic jams, while not destroying urban structures or incurring the cost of land clearance.

“It’s one of the key projects of the city’s sustainable development in promoting public transport and a Bus Rapid Transit (BRT) network.

The road tunnel project will offer smooth transport with a multi-level road intersection, and will not require land clearance and resettlement,” Mai Dinh Khanh from the city’s transport department told Vietnam News at the ground-breaking ceremony.

He said the project would ease congestion and reduce the pollution of rapid urbanisation and would encourage a higher use of public transport for daily commutes.

Nguyen Huu Tuan, deputy general director of the Thuan An construction and trading joint-stock company, a contractor of the project, said the tunnel will be completed next October before the 2017 APEC (Asia-Pacific Economic Co-operation) Summit in Da Nang.

“We plan to speed up construction of the project before hosting APEC.

The tunnel will be used during the biggest event which will be held in the city next year,” Tuan said.

With a population of one million, Da Nang’s current public transit system is not meeting the needs of local residents with only 1 percent of the 2.5 million daily journeys made by public transport.

The city also plans to build a metro, tramway, underground and sky train between 2020 and 2030.

In October, the city began construction the 137.5-billion VND (6.11 million USD) road tunnel at the intersection of Le Duan and Tran Phu streets.

Da Nang, the third largest city in Vietnam, has invested a lot in urban development to make it the largest city in the central region and a green city by 2025, with funds from the World Bank.

The bank also funded a five-year priority infrastructure project for the city, by covering 70 percent of the total investment of $218.4 million.

Last year, the city put into operation a three-level rail and road flyover at Hue Junction to alleviate congestion./.