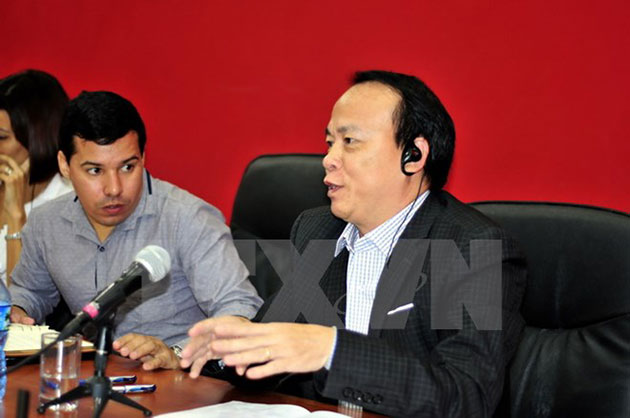 Researchers from the Cuba Centre for International Economic Research sketched out the geopolitical and economic significance as well as position and benefit of each state joining the agreements, namely the Trans-Pacific Partnership (TPP), the Free Trade Area for the Asia Pacific (FTAAP) and the Regional Comprehensive Economic Partnership (RCEP).

Dr. Ruvisley Gonzalez from Cuba’s Centre for International Political Research said that Vietnam’s engagement in the three super deals is part of the country’s intensive global integration serving its national modernisation and industrialisation, with priority on spaces for the strengthening and diversification of investment and trade.

At the same time, he also pointed out internal and external advantages and challenges that Vietnam has faced when joining the ambitious agreements in the Pacific Rim that is considered the driving force of the world economy in the 21st century, he said.

As the keynote speaker of the event, Assistant Prof. Dr. Cu Chi Loi, head of the Vietnam Institute of American Studies under the Vietnam Academy of Social Sciences, focused on analysing Vietnam’s process of joining the TPP, as well as the Vietnam-US relations and possible effects stemming from the TPP.

He also evaluated the current status of the TPP after the US’s withdrawal.

Speaking on the sidelines of the event, Loi affirmed that the workshop create a chance for Vietnam and Cuba to share experience and deepen mutual understanding.

He also stressed that the two sides hold abundant opportunities to lift up their economic ties to match the sound traditional political relations./.