China’s construction of large-scale artificial islands in the Truong Sa (Spratly) archipelago and its deployment of weaponry to these islands have brazenly violated Vietnam’s sovereignty, concerning neighbouring countries and the international community regarding security, safety and freedom of aviation and navigation in the East Sea. 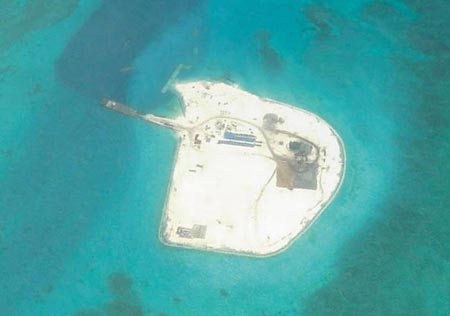 The issues also attracted great interest and was the focus of discussions at the 14 th Shangri-la Dialogue, recently held in Singapore.

According to Colonel Vu Khanh, a Vietnamese expert on international affairs, participating experts and scholars raised scores of questions about China’s acts and its inconsistent explanations for warning US surveillance plane and warships to leave the airspace above and near the artificial islands China is developing in the East Sea.

However, the Chinese representative declined to reply to the questions, instead reading a prepared document that sought to calm other countries down while promising to discuss the East Sea situation.

In his speech at the dialogue, US Defence Secretary Ashton Carter criticised China’s land reclamation in the East Sea as out of step with international rules, affirming that turning underwater rock into airfields won’t expand its sovereignty.

According to a report presented to the US Senate’s Foreign Affairs Commission, China has conducted sea encroachment and built large-scale works in the areas it is occupying illegally in the Truong Sa archipelago, especially in Gaven reef (around 15 hectares), Gac Ma reef (13.2 hectares), Chau Vien (24 hectares), Huy Go (9.2 hectares) and Chu Thap (nearly 180 hectares).

Since 2014, China has reclaimed nearly 2,000 acres (800 hectares). Together with land reclamation, China’s “nine-dash line” claims, illegal installation of its Haiyang Shiyou-981 oil rig in Vietnam’s exclusive economic zone and continental shelf, unilateral ban of fishing in the peak season, and blocking two Filipino vessels from supplying marines stationed on Co May shoal have worried the international community that China intends to make undisputed waters into disputed ones and expand its military presence in the East Sea.

On April 9, the Chinese Foreign Ministry’s spokesperson stated that the country’s land reclamation is aimed at better carrying out its international responsibility and obligation in maritime search and rescue, disaster prevention and mitigation and marine science and research, as well as to better safeguard territorial sovereignty and maritime rights and interests and serve necessary military defence activities.

However, the reefs it has reclaimed like Chau Vien, Chu Thap, Gaven, Gac Ma, Tu Nghi and Su Bi do not belong to China. They are in fact reefs of Vietnam’s Truong Sa archipelago which China used force to occupy in 1988. Therefore, China’s explanation of safeguarding territorial sovereignty and maritime rights and interests etc is just pure sophistry.

At the 14th Shangri-La Dialogue, China admitted to building many architectures on reefs in the East Sea, saying that the construction mainly aims at improving the working and living conditions of those who are living there. However, its deployment of weaponry to several islands runs counter to its statement that the land reclamation is for civil purposes.

In fact, China’s explanations about its recent moves in the East Sea seem to undermine others’ trust in it, which is a power, a permanent member of the UN Security Council.

Hoang Sa (Paracel) and Truong Sa archipelagos have long been an integral part of Vietnam who established and has exercised its sovereignty over the two archipelagos continually since at least the 17 th century.

Vietnam has also demanded the country immediately desist its illegal construction of artificial islands and deployment of weaponry to the areas while sitting down to negotiate the signing of a Code of Conduct in the East Sea.