Cham Culture, Sports and Tourism Festival opens in An Giang

A large-scale Culture, Sports and Tourism Festival of Cham people kicked off on July 15 in An Phu district, the Mekong Delta province of An Giang. 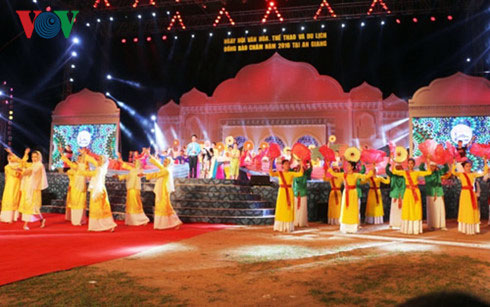 At the opening ceremony of the festival (Source: VOV)

The festival gathered nearly 600 Cham athletes, actors and actress from 11 localities and thousands of people from Cham, Kinh, Hoa, Kmer ethnic minority groups in An Giang and neighbouring provinces.

The three-day event aims to promote the cultural values of Cham people to both domestic and foreign visitors. It also reflected the attention of the Party and State to the preserving and developing Cham people amidst the international integration trend.

According to Deputy Minister of Culture, Sports and Tourism Huynh Vinh Ai, the event is a chance for Cham artists, artisans and dignitaries to meet, exchange and share experience in conserving and promoting the cultural identity of Cham people in the community, strengthening the national solidarity bloc.

A conference on Cham culture in the national construction and development will also be held.