Floods, sparked by torrential rains, have occurred in central provinces over the last few days, beginning to wreak havoc on the localities which already suffered from devastating floods just some weeks ago. 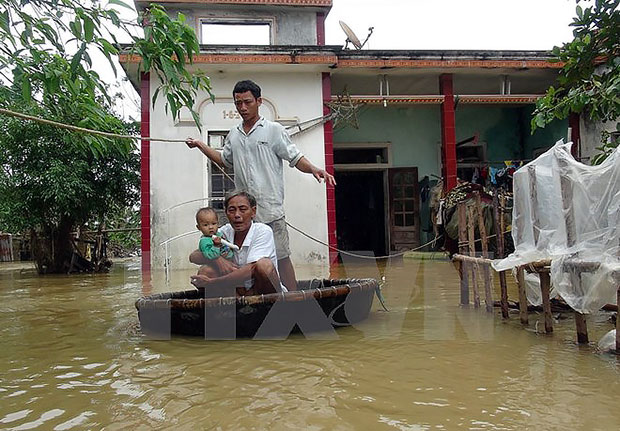 Residents in Ba Don township of Quang Binh province move by a boat as their house is deluged by floodwater (Photo: VNA)

The Prime Minister has sent an official telegraph to authorities of the provinces, asking them to take proactive measures to respond to flooding, minimise human and property losses, and swiftly address flood consequences.

The telegraph says that due to impacts of a cold spell and winds from the east, heavy rains have been recorded in Ha Tinh, Quang Binh and Quang Tri provinces since October 30.

Many localities which are working to recover from the mid-October flood continue to be inundated or isolated.

The National Centre for Hydro-Meteorological Forecasting said a rainfall of 50-100mm within six hours was reported in the provinces from Quang Binh to Quang Ngai on November 1.

The rainfall even reached 105mm in Khe Sanh town of Quang Tri, 114mm in A Luoi district and 104mm in Nam Dong district of Thua Thien-Hue.

Rivers traversing Cam Lo and Gio Linh districts and Dong Ha city of Quang Tri province have been in spate and floodwater has inundated a number of houses and a large area of crops.

In Cam Lo alone, one people went missing, and another was injured in Cam Hieu commune. More than 2,000 houses and over 200ha of crops have been deluged with floodwater, which has also damaged some 50km of roads.

Notably, over 5,000 cubic metres of rock and earth was washed onto a section of National Road 40B in Tra Bui commune of Bac Tra My district, blocking the traffic flow.

In Phu Loc district, flooding made hundreds of students at the Loc Tri 1 Primary School stay at home on November 1.

Meanwhile, forces are being deployed in Phong Dien district to cope with floods in areas near the O Lau River, of which the water level is rising quickly./.