Can Tho troupe preserves classical drama 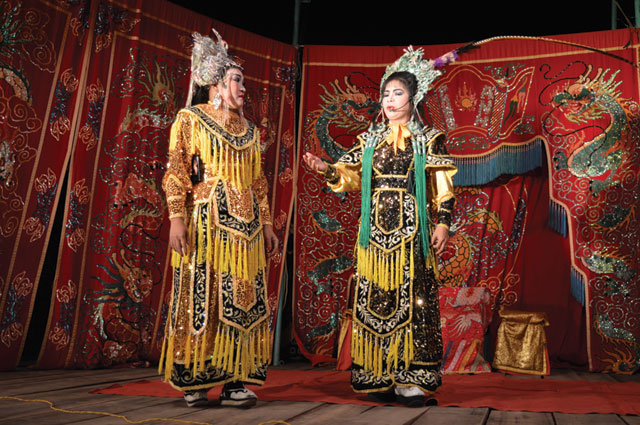 A troupe in Can Tho city is holding performances of ‘hat boi’ by skilled artists and offering free training to youth to introduce future generations to the classical drama.

The Phuong Anh Troupe of Binh Thuy district’s Cultural House has travelled around the region to offer interactive performances this summer.

‘Hat boi’ is a symbolic form of traditional art that originated in the central region and expanded in southern Vietnam, particularly in Mekong River Delta provinces.

“Our performances provide local people with the basic knowledge of ‘hat boi’ and instruments. The audiences can also learn to play the music, sing and dance traditional tunes,” said Nguyen Thi Anh, 60, head of the troupe.

Using their strong voices and dance skills and playing traditional instruments to great effect, Anh and her peers impress their audiences with popular plays about the hopes and dreams of people.

They have visited many villages of Can Tho and neighbouring provinces, including Hau Giang, An Giang, Vinh Long and Dong Thap, to feature a long life for ‘hat boi’.

Anh said her troupe were keen on exposing youth to ‘hat boi’, which is part of their heritage that is hundreds of years old.

“We also hope that our troupe will give youth the opportunity to understand and appreciate the country’s traditional theatre,” she said.

Anh is the third generation of her family involves in this classical drama art.

She began singing on the stage at the age of 10 after learning her first lesson of the art from her parents. Both were famous in the region during the 1960s.

She worked for the Phuoc Tan Hat Boi Troupe of Can Tho, playing several leading roles in famous plays such as ‘Duong Ve Que Me’ (Road to the Homeland) and ‘Tieu Anh Phung’ (Heroine Tieu Anh Phung).

In 1980, Anh moved to Dong Thap and opened her own troupe called Dong Thap-Homeland which attracted dozens of skilled artists. Five years later she closed the troupe after facing financial difficulties.

In 2004, she returned to Can Tho and reopened the Phuong Anh Troupe.

“I saw the love for ‘hat boi’ from the local people,” said Anh.

Theatre scriptwriter Nham Hung of the Vietnam Theatre Artists’ Association said: “Anh is one of the region’s very few professional performers who have kept the art original and unique on stage. Thanks to her troupe, ‘hat boi’ will remain alive.”

‘Hat boi’ was created in the 12th century, and is considered the prototype for ‘cai luong’ (reformed opera) in southern Vietnam.

The art itself is a mix of old southern Vietnamese tunes and Binh Dinh classical opera.

In the late 19th century, ‘hat boi’ was performed at traditional festivals and anniversaries.

It is has traditional, royal, social and modern styles, and features dances, songs and music highly stylised and symbolic. The performers speak, sing and dance.

‘Hat boi’ artists also use theatre costume accessories and equipment to represent their characters on stage.