Can Tho succeeds in 2016 socio-economic development

The Mekong Delta city of Can Tho fulfilled 11 out of 13 socio-economic development targets in 2016 thank to all-out efforts of local authorities and people. 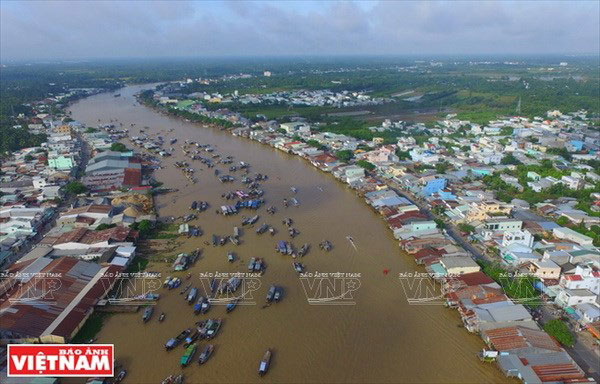 Cai Rang floating market in Can Tho city (Source: VNA)

Local authorities granted investment licences to nine new projects and approved added capital to seven existing ones with a total value of nearly 200 million USD in industrial parks and export processing zones, lifting total projects in the locality to 224, worth close to 1.6 billion USD.

Total revenue of enterprises operating in the province was estimated to reach 1.47 billion USD, 2 percent higher than that of 2015.

They employed 31,700 workers, an increase of 688 people against the previous year.

However, the locality failed to realise its export goal in the year due to the tumbled shipment of its key exports such as rice and aquatic products.

The situation impacted greatly on the city’s budget collection, which reached only 8.7 trillion VND, down 1.7 percent against the last year.

A series of measures were taken to improve the quality of education and vocational training, promote poverty reduction and ensure social welfare, contributing to bringing better spiritual and material lives to locals.

Can Tho is looking to become an economic, education and training, health care and sci-tech centre and an important transport intersection in the Mekong Delta region in the near future.

The city is determined to accelerate the economic restructuring in connection with the change of growth model this year, towards increasing the scale, efficiency and competiveness of its economy.

Its export turnover is expected to hit 1.67 billion USD, a year-on-year increase of 7.5 percent.

To that end, the city will implement breakthrough measures to create drastic changes in socio-economic development, said Vo Thanh Thong, Chairman of the municipal People’s Committee.

Efforts will be made to improve the investment climate, step up administrative reform, adapt to climate change and ensure defence, security and social order./.