The body of the last sailor aboard the Hai Thanh 26-BLC cargo ship that sank off the coast of southern Ba Ria-Vung Tau province was found on April 1. 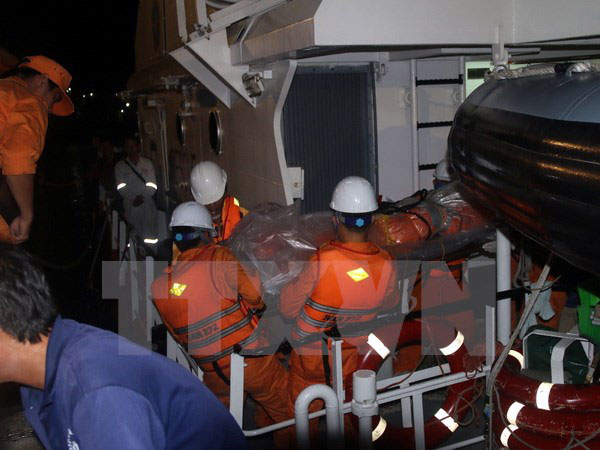 Rescue workers take the body of one of the victims of Hai Thanh 26 ship’s accident ashore (Photo: VNA)

According to Major General Le Manh Tien, Deputy Chief of Office of the National Committee for Search and Rescue, divers found the victim stuck in the vessel which had 11 crewmen.

Nine of them were killed during the accident and all the bodies have been recovered.

The names of the victims were defined before they were brought ashore and handed over to their families in the afternoon of April 1, he said.

Tien added that rescue forces are working to shield fuel holds of the vessel to prevent oil spills, while authorities are examining the shipwreck to investigate the cause of the accident.

Earlier at about 4.37am on March 28, the Vietnam Maritime Search and Rescue Co-ordination Centre received emergency rescue signal from the Hai Thanh 26, some 44 nautical miles east of Vung Tau city in Ba Ria-Vung Tau province.

The centre immediately asked the Petrolimex 14 – another vessel sailing some five nautical miles near the signal site – to come to the area. At the same time, the centre also informed two other vessels – SAR413 and SAR 272 – to reach the area to support the rescue.

Arriving at the area, Petrolimex 14 found a breeches-buoy with two crewmen on board. Both of them were rescued.

According to Hoang Tien Khoi, one of the two crewmen rescued by the Petrolimex 14, the Hai Thanh 26 – a cargo ship with some 3,000-tonne transport capacity – sank after colliding with another cargo ship.

The accident occurred when the cargo ship carrying clinker was sailing from northern Hai Phong city to southern Can Tho city, Khoi said./.