Infringements and defects committed by the Ministry of Natural Resources and Environment’s Party Civil Affairs Committee and individuals involved in the Formosa fish deaths were serious and must be punished, announced the Party Central Committee’s Inspection Commission. 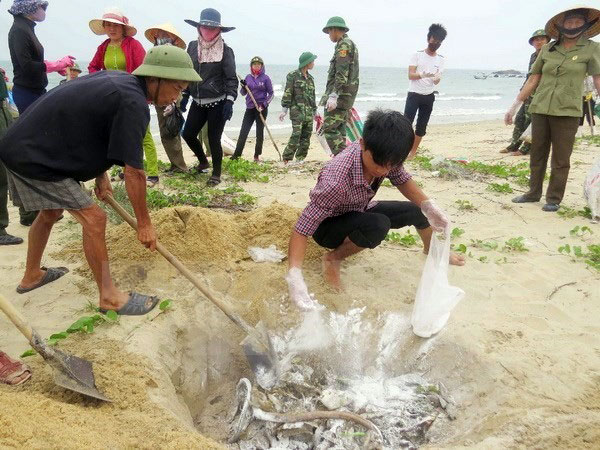 In a February 23 announcement of the results of the commission’s 11th meeting from February 15-17, the commission concluded that from 2008-16 the ministry’s Party Civil Affairs Committee was irresponsible in exercising their leadership, carried out insufficient inspections and supervision and let infringements occur in assessment of environmental impacts, and adjustment of waste water discharge location and State management of the Formosa Ha Tinh project.

The environmental incident left hundreds of fish dead and affected the livelihoods of hundreds of thousands of locals.

The document indicated that during the 2004-11, and 2011-16 terms, the Party Civil Affairs Committee of the Ha Tinh provincial People’s Committee was irresponsible in exercising leadership, instruction and management, and carried out insufficient inspections and supervision in project implementation, which gave rise to violations in appraising, approving, licensing and performing State management of the project.

The provincial Party Committee’s Standing Board was said to be irresponsible in leading, instructing, examining, and supervising activities of the Party Civil Affairs Committee of the provincial People’s Committee during the implementation of the Formosa Ha Tinh project.

The wrongdoings of the province’s Party Civil Affairs Committee and Vo Kim Cu, and Ho Anh Tuan were serious, the document said.