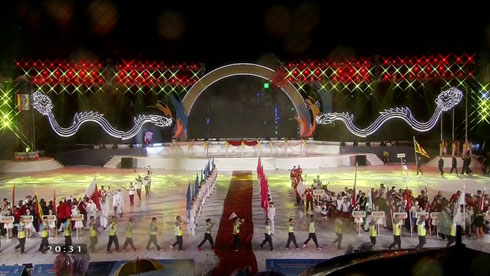 At the opening ceremony (Photo: VOV)

Vietnamese shooter Hoang Xuan Vinh who won one gold and one silver medal for Vietnam at the Rio 2016 Olympics in Brazil was selected to be one of the five outstanding athletes to carry the torch of at the ceremony.

The ceremony was delighted with interesting art performaces with the theme ‘Shining Ocean – Sparkling Future’ featuring the unique culture of Da Nang in particular and Vietnam in general as well as delivered the message of peace and friendship in Asia.

The ABG5 has attracted the participation of over 4,500 athletes and trainers, representing 42 nations across Asia.

The athletes will be competing for 172 sets of medals in fourteen sports.

Previously, the ABG5 competition has already commenced, with several rounds of Muay Thai, which features ten weight categories for men and six for women.

They are the first medals for Vietnam in the games.

The tournament also provides an ideal chance to advertise and introduce Vietnam’s tourism industry as a whole and its central region in particular.

On the occasion, Da Nang’s tourism sector is introducing its tours and tourism products to visitors, both at home and abroad./.

The Opening of The 15ᵗʰ Students’ Singing Voice Contest 2021