The Association of Southeast Asian Nations (ASEAN)’s dynamic economy and its high growth rate was highlighted at a conference held in Ottawa, Canada, on September 21 by ASEAN representatives. 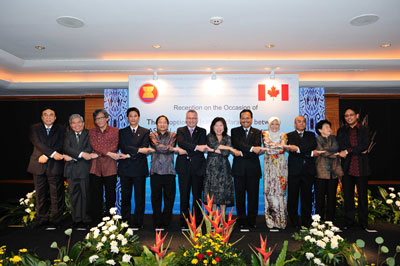 ASEAN and Canada officials at a meeting. (Source: asean.org)

The conference, marking the 49th anniversary of the formation of ASEAN at Carleton University, was attended by nearly 100 guests, including ambassadors from seven ASEAN countries in Canada, diplomats from other countries and scholars.

She lauded the value of the community’s solidarity and unity.

ASEAN’s central role in the region, especially in security, has received international support, especially from the dialogue partners of ASEAN, she noted.

Brian Kingston, Vice-President , International and Fiscal Issues, Business Council of Canada, said as the world’s youngest and most dynamic economy, the ASEAN Community is a hot economic area.

With a population of 630 million and the world’s sixth largest economy, ASEAN will soon become an Asian free trade centre, attracting investment and trade from big global players.

ASEAN has accelerated the completion of the Regional Comprehensive Economic Partnership, creating one of the world’s biggest markets./.