Issues related to the implementation of the Declaration on the Conduct of Parties in the East Sea (DOC) and the building of the Code of Conduct (COC) will be submitted to the upcoming ASEAN-China Summit in Vientiane, according to Vietnamese Deputy Foreign Minister Le Hoai Trung. 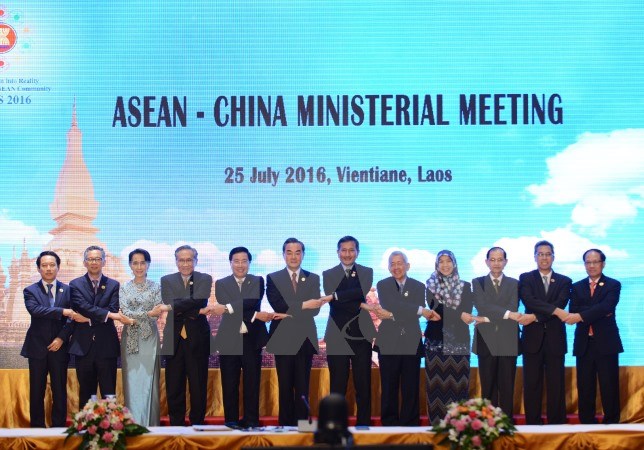 The ASEAN and Chinese foreign ministers at a meeting in Vientiane on July 25
(Photo: VNA)

The Deputy FM, who led the Vietnamese delegation to the ASEAN Senior Officials’ Meeting (SOM) in Vientiane on September 5, said most SOM heads of ASEAN countries expressed their wish for the effective implementation of the DOC and the early signing of the COC.

The SOM was convened to prepare for the 28th &29th ASEAN summits and related meetings which will begin from September 6.

The meeting took a close look at the final working programmes, agendas and content of documents to be approved at the upcoming summits.

A total of 11 official meetings are scheduled to take place from September 6 to 9, including the 28th & 29th ASEAN Summits; the 19th ASEAN+3 Summit; the fourth East Asia Summit (EAS); seven ASEAN+1 summits with seven partners – namely China, the Republic of Korea, Japan, the US, India, Australia and the United Nations; and the 8th Mekong – Japan Summit Meeting.

Nearly 50 documents will be signed, adopted and acknowledged at those meetings, while Laos as ASEAN Chair will issue a number of Chairman Statements.

The senior officials also discussed the pace of implementation of the ASEAN Political-Security Blueprint 2025; how to promote ASEAN’s principles and behavior standards; pushing the observance of the DOC and the building of the COC.

In addition, they debated measures to promote external relations and ASEAN’s central role as well as improve the efficiency of ASEAN agencies’ operation and coordination.

Preparations for the conference of ASEAN Foreign Ministers slated for later this month in New York, the US, and the ASEAN-EU Foreign Ministers’ meeting in Bangkok, Thailand in October were another issue on the senior officials meeting’s agenda./.