The Asia-Pacific Economic Cooperation (APEC) leaders have concurred to maintain the role of the forum in promoting an open investment and trade environment in the Asia – Pacific region.

Leaders from 21 APEC member economies assembled in Beijing, China on November 11 for the plenary sessions of the 22nd APEC Economic Leaders’ Meeting.
At the first session, they examined ways to strengthen regional economic links- one of the three priorities of APEC cooperation in 2014.

Addressing the opening session, Chinese President Xi Jinping described the APEC Summit this year as a historical significant milestone, acknowledging the great achievements of the 25 year-path of the establishment and development of forum, as well as the 20-year efforts in implementing the Bogor Goals which has demonstrated solidarity, respect, trust and support for mutual benefit.

Xi Jinping stated China contributes US$10 million to the implementation of APEC programs and projects on capacity building for developing member economies.

The leaders praised APEC’s important contributions and sustained efforts to narrow the development gap and stimulate strong, sustainable, balanced and equitable growth in the region and the world, thus raising the strategic position of the Asia – Pacific region.

With the recorded achievements, APEC is now at a historic time of every effort to shape a future through the trans Asia–Pacific partnership towards building an open economic in the region, promoting innovation, growth , and the role of the Asia – Pacific region in leading the global economy. 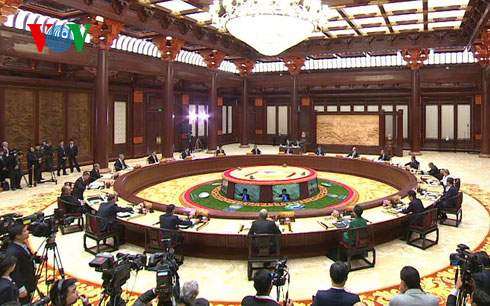 They agreed to intensify efforts to maintain the top important role of the APEC forum in supporting sustainable economic growth, maintain prosperity and propel an open investment and trade environment in the Asia – Pacific region.

In his speech, President Truong Tan Sang shared overall assessment of the historical significance of the APEC Summit this year as well as the role and contributions of the forum since its inception.

“Vietnam highly appreciates and fully supports the adoption of measures to accelerate Bali commitments, the implementation of the Bogor Goals and trade and investment liberalization.

To ensure effective regional connectivity, it is essential to closely link connectivity efforts with sustainable development, the implementation of the Millennium Development Goals (MDGs) and the building of a post-2015 development agenda as well as response to global challenges. 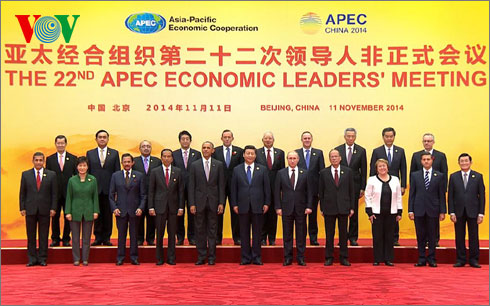 The Vietnamese State leader stressed that with economic, scientific and technological potential, APEC members should engage in and support sub-regional and regional programs, including ASEAN, mainland ASEAN and the Mekong sub-region.

Highlighting the contributions of Vietnam to APEC cooperation and regional economic connectivity, Sang said through the process of comprehensive international integration, Vietnam is becoming a proactive nucleus in Southeast Asia and a bridge linking the mainland and island ASEAN economies.

With the prospect for deploying and finalizing negotiations on 15 free trade agreements through 2020, Vietnam will become an important link of a large economically connected network of 18 APEC members.

This provides a basic foundation for the country and other APEC members to elevate regional connectivity and the profile of the APEC forum in the Asia – Pacific region of peace, stability, development and prosperity.