Agro-forestry-fishery exports were estimated to have reached US$2.69 billion in November, pushing the total figure so far this year to US$29.1 billion, a rise of 5.9% over the same period of last year.

The results make the Ministry of Agriculture and Rural Development’s export value target of US$31 billion for this year more feasible. 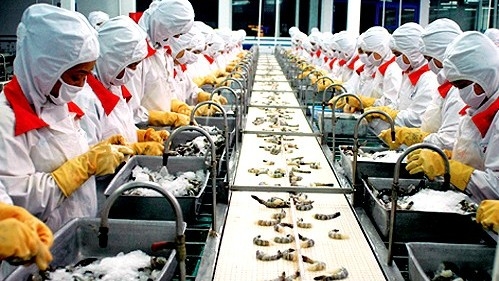 Agro-forestry-fishery exports were estimated to have reached US$2.69 billion in November. (Source: NDO/VNA)

In the first eleven months of this year, the country shipped abroad 4.54 million tonnes of rice for US$2 billion, a year-on-year fall of US$25 in volume and 20.3% in value.

At the same time, a decrease was also seen in exports of cassava and cassava products, as 294,000 tonnes were bought for US$80 million, which raised the figures from January-November to 3.3 million tonnes and US$896 million, respectively—down 12.3% and 24.9% over the same period of last year.

China was the largest consumer of Vietnam’s rice, cassava and cassava products.

The country imported 36% of Vietnam’s total exported rice and 86.2% of shipped cassava and cassava products.

Peppercorn exports also enjoyed a 15% rise to US$1.37 billion.

Shipments of aquatic products in November were estimated to hit US$6.4 billion, up 6.9% year on year, while those of major forestry products were US$6.5 billion, a rise of 0.8%./.