Le Cong Vinh’s 50th goal for the national team secured a 2-1 win for Vietnam over hosts Myanmar in the ASEAN Football Federation (AFF) Cup’s Group B second match on November 20 in Yangon. 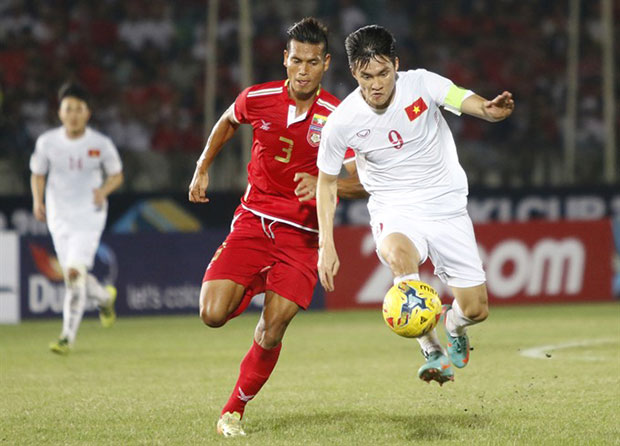 Luong Xuan Truong kicked off the attack from the centre, passing the ball to attacking midfielder Nguyen Trong Hoang who went right near the goal line, giving Vinh just enough time to net it from a very close range in the 79th minute.

It was Vinh’s 14th goal in the AFF Cup. He needs three more goals to hare the first position with overall top scorer Noh Alam Shah of Singapore.

He converted Vietnam’s domination into a lead with his smart goal, driving the ball past Myanmar’s goalie and defenders into the net.

It was again Truong, who threaded a ball through to Quyet who finished with aplomb.

It answered the question why Truong has been listed as a nominee for the MVP title and is a young player to watch at the Cup.

Earlier, Nguyen Van Toan and Tran Dinh Dong were unlucky to see their shots go wide in the early stages of the game.

Myanmar’s only goal was sandwiched between Vietnam’s winners.

After a lot of attempts, the hosts gradually got some grip on the game and found a hole in Vietnam’s defence.

Undeterred, Aung Thu, who missed a threatening chance minutes after the interval, tried again in the 73rd minute when he was rewarded as his blistering strike swiveled into the goal.

Earlier, Myanmar could have leveled matters just before the break but Win Niang Soe lashed his shot just over the bar after doing well to get into the box.

In the second match on November 23, Vietnam will play Malaysia who came from behind to beat Cambodia 3-2 in an earlier match of the group, also at Thuwanna Stadium.

Myanmar will play Cambodia in a later game.

Both sides must win this match to maintain their chances for the knock-out stage.

In Group A on November 19, Thailand’s Teerasil Dangda scored a hat trick in their 4-2 win over Indonesia at Philippines Sports Stadium in Bocaue city.

Co-hosts the Philippines later played out a goalless draw against Singapore./.