A spectacular shift in Russia–Turkey relations

Russian President Vladimir Putin has recently paid his first visit to Turkey since relations between the two countries fell to their nadir in November 2015. 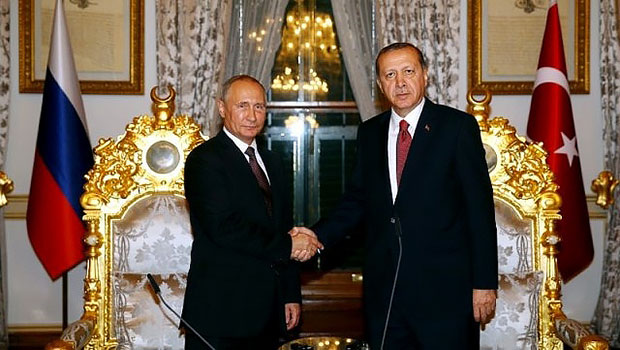 Following up on a meeting between the two nations’ leaders in St. Petersburg in August, President Putin’s visit aimed to mend relations between Moscow and Ankara and reached the “Turkish Stream” agreement to expand economic cooperation between the two sides.

Receiving the Russian President at an ancient Ottoman villa in Istanbul, Turkish President Erdoğan declared that the two leaders would hold a day-long discussion on energy agreements, trade relations, tourism, defence cooperation and the Syrian conflict.

The Turkish leader expressed his belief that the normalisation of bilateral relations would be further accelerated.

The head of the Kremlin also announced a decision by Moscow to lifting its ban on certain food imports from Turkey, which was imposed after the Turkish military shot down a Russian aircraft on the Syrian border in November last year.

In the context of the two countries hopes to increase the volume of bilateral trade to US$100 billion, the agreement to resume the construction of the Akkuyu Nuclear Power Plant on the shores of the Mediterranean, as well as the acceleration of negotiations on a free trade agreement to be signed by the end of 2017, is a breakthrough turning a new page in bilateral relations.

One important result of the visit by President Putin was the signing of an intergovernmental agreement on the “Turkish Stream” project.

With two branches of gas pipeline running through the bottom of the Black Sea to be built with a capacity of over 15 billion m3 per branch, the project is expected to bring benefits to both sides.

Turkey has the opportunity to receive gas supplies from Russia at lower prices while Moscow can strengthen its position in the European gas market, then decrease dependence on gas supplies through Ukraine—the main route taking Russian energy to Europe.

The relationship between Russia and Turkey, a NATO member, is warm again at a time when both countries are facing economic difficulties and tensions with the West.

The dramatic shift in relations between Russia and Turkey not only brings economic benefits to both sides, but also affects the dynamics of the region.

Although it is a member of NATO, Turkey is going through a challenging phase in its relations with the US. Washington is “on the gridiron” witnessing its NATO ally taking bold steps in improving relations with Russia.

President Erdoğan has suffered from Western criticism, as he “bypassed” the US when Ankara declared its willingness to cooperate with Moscow on defence.

Remarkably, after the latest meeting in Istanbul, diplomats revealed that Turkey could consider Russia’s proposal on the development of a missile defence system.

This information shocked both NATO and the EU.

According to analysts, if Turkey chooses to build missile defence systems (including space defence) revolving around Russia’s S-300VM, the implications are enormous, across all sectors, for both the US and NATO.

Russia–Turkey relations are improving, as the two countries have taken several steps to rapidly promote ties since the Turkish president officially sent a letter of apology to his Russian counterpart on the shooting down of the Russian plane.

The 180-degree turn in the Russia–Turkey relationship on the Syrian issue has given the US cause for concern.

Despite backing opposite sides in the Syrian conflict, Ankara and Moscow have suddenly shaken hands while conflict has sprung up between Turkey and the US over the Kurdish issue.

The disagreement between Ankara and Washington pushed the Syrian situation in favour of Russia.

Turkey’s announcement of a partnership with Russia poured cold water on its relationship with the US. Analysts do not exclude the possibility that Russia is taking steps to restore its influence in the region.

That Turkey is taking steps to improve bilateral relations with Russia amid a serious rift with its allies in NATO, as well as accepting the suspension of its “EU dream,” shows that Moscow is gaining advancing in its plan to expand its influence in the area between the two banks of the Eurasian continent./.