A ceremony was held on March 19 to honor ten outstanding youths selected by the Ho Chi Minh Communist Youth Union’s Central Committee and the Fund for Vietnamese Young Talents in 2016. 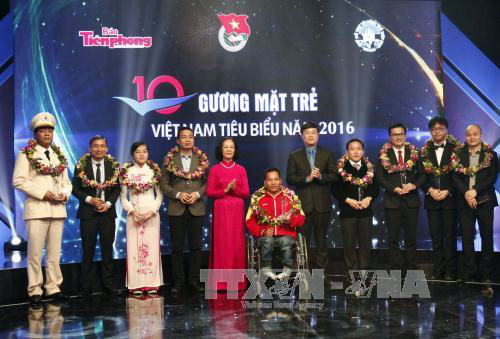 Addressing the event, Head of the Party Central Committee’s Commission for Mass Mobilisation Truong Thi Mai said that each person in the group is a success story about pioneering, persistence, desire and spirit to serve the people and devote to the nation.

She stressed that during the country’s reform, the Party and State have paid special attention to the youth through support policies designed for them.

She called for the youth across the country to continue promoting their pioneering role and overcome all difficulties to pursue their dreams, thus making more contributions to the country’s growth.

She also asked the Ho Chi Minh Communist Youth Union’s Central Committee and the Fund for Vietnamese Young Talents to seek more creative and effective measures in assisting the youth, while proposing policies to nurture, honour and promote young talents.

The Party Organisation and government at all levels should also join hands in developing young talents, considering the work as a joint responsibility, she added.

The award in the category of security and safety went to Hoang Anh Tuan, deputy head of the traffic control team number 2 of Traffic Police Office of Bac Giang Police Department, while Le Kiem Son from the drug crime prevention and control office of the Ha Tinh Border Guard Command was the winner in defence category.

In the area of sport, disabled weight lifter Le Van Cong was honoured for winning Vietnam’s first gold medal at the Paralympic 2016 in Rio de Janeiro, Brazil, while Tran Le Quang Tien who won the Mozart international music award when he was 15, was selected as the outstanding face in culture and art./.