The 14th National Assembly (NA) wrapped up the second session on November 23 morning, completing the 26-day agenda with a number of important issues. 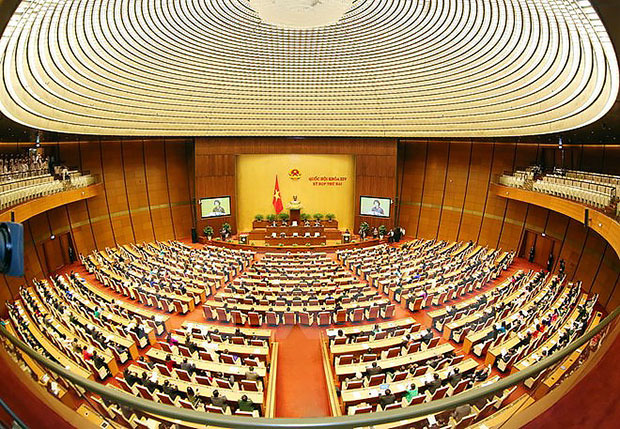 An overview of the second session’s closing ceremony (Photo: VNA)

They reviewed the implementation outcomes of the socio-economic development and State budget plans for 2016, along with economic restructuring between 2011 and 2015.

They perceived that the entire Party, people, sectors, and authorities at all levels have made efforts and reaped numerous important outcomes in realising the set plans, including stable macro-economy, fair growth rate, controlled inflation, and initial encouraging results in the economic restructuring associated with growth model reform.

While major economic balances have been ensured, social welfares and security-defence were guaranteed.

She noted that taking a high sense of responsibility, the deputies pointed out existing shortcomings such as the slowness of economic restructuring, losses and ineffective operations of some projects, and high public debt.

It adopted three laws, 11 resolutions, and gave opinions to 14 other bills, including the Law on Belief and Religion, the Law on Auction, and the resolution on pilot e-visa issuance for foreigners.

The top legislator said this was the first time the parliament gave decisions about master medium-term plans on finance and investment that also take into account short and long terms.

With prudent and thorough consideration, the NA also decided to stop the implementation of the Ninh Thuan nuclear power plant project, she added.

During the session, the NA convened the first question & answer sessions involving several Cabinet members, during which, issues of public concern were cleared.

Deputies raised clear, succinct and to-the-point questions, especially pointing out weaknesses and shortcomings, clarifying responsibilities and solutions to the fields of industry and trade, environment and natural resources, education-training and home affairs.

Ministers candidly responded to queries and laid out measures for the near future.

The Prime Minister also directly made clear issues under his helm.

The legislature asked ministers to take drastic actions to deliver commitments in front of the NA and voters nationwide, thus meeting aspirations of the people.

Besides the key agenda, the NA also debuted groups of female, young deputies, and friendship parliamentarians, and launched other important external activities, the NA Chairwoman noted.

At the final session held earlier, NA Secretary General and Chairman of the NA Office Nguyen Hanh Phuc presented a report on acquiring and amending the draft resolution on the second session’s questions and answers.

With 95.54 percent of approvals, the resolution was adopted.

Under the chair of Permanent NA Vice Chairwoman Tong Thi Phong, head of the NA’s Economic Committee Vu Hong Thanh presented a report on acquiring feedback on the draft resolution on further improving the efficiency of the implementation of the National Target Programme on New Rural Development in combination with agricultural restructuring.

Lawmakers later approved the resolution with 95.13 percent of votes./.