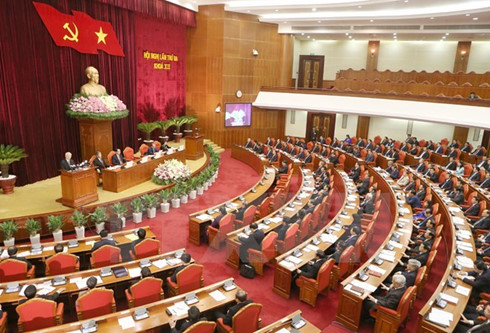 The 12th Party Central Committee opened its third meeting in Hanoi on July 4 under the chair of Party General Secretary Nguyen Phu Trong, with its agenda focusing on working regulations of the Party’s agencies and recommendations on high-ranking State personnel, among others.

In his opening speech, the Party Chief said the working regulations of the Party Central Committee, the Politburo, the Secretariat and the Commission for Inspection should be built on the previous ones and need to be specific, cohesive and suitable with the reality, ensuring democracy will be promoted further and discipline must be well maintained.

It is necessary to improve capacity and efficiency in the Party’s leadership and promote the autonomy, creativity and responsibility of other organisations in the political system, he added.

He also underlined the importance of personnel recommendations for State agencies in 2016-2021, saying “it is a crucial task”.

He said at the 13th National Assembly’s 11th session, NA deputies elected and approved the posts of President, Prime Minister, National Assembly Chairperson and 34 other leaders of State agencies, introduced by the Party Central Committee at its second meeting.

At this meeting, these posts will not be re-voted, but the remaining 13 posts that have not yet be introduced to the 12th Party Central Committee’s second plenum will go through a voting before being submitted to the 14th National Assembly for consideration, election or approval at its first session.

The third plenum will run till July 8.