The “Vietnam Rising” milk fund has donated over 130,000 glasses of milk worth 800 million VND (35,200 USD) to more than 1,400 poor, disabled and orphaned children in the Mekong Delta province of Vinh Long. 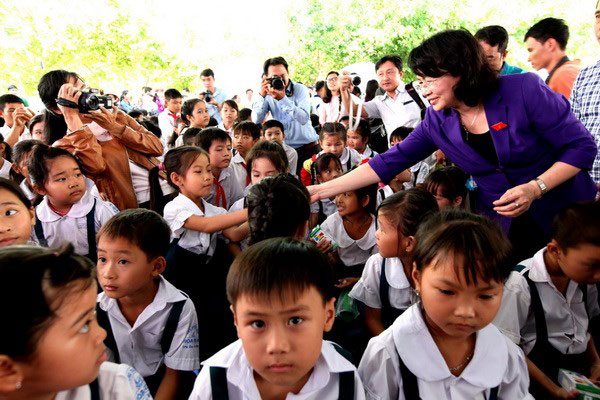 Vice President Dang Thi Ngoc Thinh, and representatives from the Ministry of Labour, Invalids and Social Affairs, the Vietnam Children Sponsor Fund (VCSF) and the Vietnam Dairy Products Joint Stock Company (Vinamilk) handed over the milk at a ceremony in the locality on November 29.

On the occasion, the fund granted 200 scholarships worth 1 million VND (44 USD) each to pupils in Tra On district.

According to MoLISA Deputy Minister Dao Hong Lan, over the last nine years, the Vietnam Rising fund, under the support of the VCSF, the MoLISA and Vinamilk, provided milk worth 120 billion VND (5.28 million USD) to more than 373,000 disadvantaged children nationwide.

In the future, the fund hopes to receive greater assistance from local authorities, political and social organisations, businesses and individuals, and schools, so more milk will reach children, especially those in disadvantaged and remote areas, she said.

Vinamilk’s Management Director Bui Thi Huong said through the fund, Vinamilk has decided to provide milk worth 22.5 billion USD (990,000 USD) to 40,000 poor kids in 40 provinces and localities throughout the country in 2016./.