The local media in Laos on February 10 gave much space to highlight the success of the 39th meeting of the Laos-Vietnam Inter-Governmental Committee, saying that it will lay firm foundation for both countries to lift up their ties to a new height. 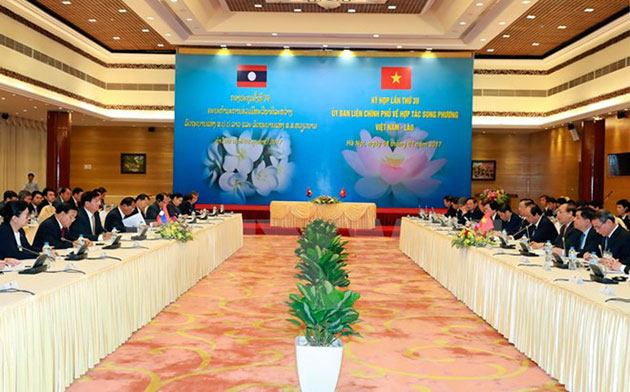 Overview of the 39th meeting of the Laos-Vietnam Inter-Governmental Committee (Photo: VNA)

The Paxason (People) Newspaper run by the Lao People’s Revolutionary Party ran an article detailing the outcomes of the February 8 meeting in Hanoi that was co-chaired by Prime Minister Nguyen Xuan Phuc and Lao Prime Minister Thongloun Sisoulith.

It noted that the two PM’s co-chairing of the event showed high determination of both sides in expanding their cooperation in 2017.

The article also reported that at meetings with Vietnamese Party General Secretary Nguyen Phu Trong, President Tran Dai Quang and National Assembly Chairwoman Nguyen Thi Kim Ngan, the Lao Prime Minister conveyed sincere thanks to Vietnam for whole-hearted support in both the past and present, while the Vietnamese leaders vowed to continue helping Laos in all fields during Laos’ reform and national construction and defence.

Meanwhile, the Vientiane Times praised the signing of a series of important deals between the two countries during the meeting, as well as the commitments of forging stronger ties between the two governments and countries.

It affirmed that the deals will make significant contributions to the implementation of agreements reached between senior leaders of both countries, adding that the two sides should further beef up economic connections, raise two-way trade, prioritize energy and transportation projects, reduce barriers and support Vietnamese investors in Laos.

Other newspapers, such as the “Laophathana”, “Pathet Lao” and “Vientianemai”, also hailed the fruitful outcomes of the meeting and underscored their belief that the event will help expand the special traditional friendship and comprehensive cooperation between the two countries, making the ties deeper and more practical to match the sound relations between the two Parties, Governments and peoples./.