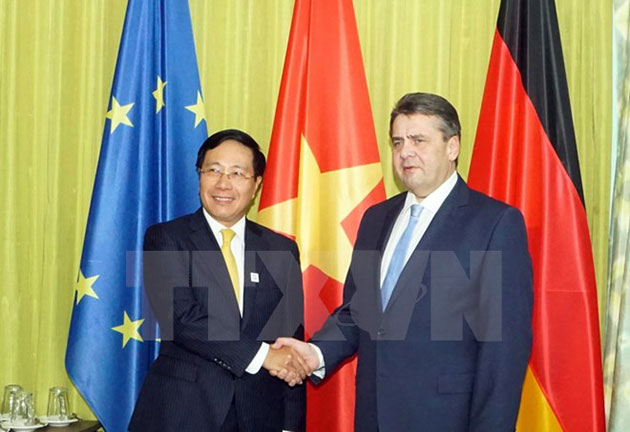 Minh made the request at a discussion on the 2030 Agenda for sustainable development during the world leading developing and emerging economies (G20) Foreign Ministers’ Meeting in Bonn, Germany on February 16, in which he participated as Foreign Minister of the APEC 2017 host country.

Minh highlighted the importance of global cooperation in the implementation of the 2030 Agenda.

He also lauded the assistance of G20 members in encouraging the sustainable use of water resources and climate change response efforts in the Mekong River basin.

Saying that the stability of the global economy is a crucial condition for development, he praised the efforts of G20 economies in maintaining macro-economic and global financial stability.

Minh said that trade is a driver for economic growth and job creation, while calling for countries to increase collaboration in boosting global and regional trade and to join hands to build a balanced multilateral trade system serving development and operating on the basis of law, ensuring all countries and people benefit from economic growth.

He went on to affirm that as the host of APEC Year 2017, Vietnam is working with APEC member economies to strengthen sustainable, creative and inclusive growth.

Noting the similarities in priorities of the G20 and APEC agendas in 2017, he emphasised that Vietnam hopes to foster coordination and connectivity between the two forums, thus contributing to strengthening global partnerships.

During the discussion, participants agreed that sustainable growth and poverty eradication are most effective measures to build and preserve peace and stability, while highly valuing international affiliation and calling for responsible actions and the responsible use of resources for sustainable growth.

Themed “Shaping the global order – foreign policy beyond crisis management,” the G20 Foreign Ministers’ Meeting focused on implementing the 2030 Agenda, maintaining peace in the new context and forging cooperation and support for Africa.

This is the first time that a non-G20 member has been invited to the two-day meeting, which shows the position of Vietnam and highlights its responsible contributions to the region and world.

The G20 groups the world’s 19 largest economies (based on GDP) and the EU.

Founded in 1999, the group now accounts for 85 percent of the world economy.

Its members include the US, Germany, Japan, France, the UK, Italy and Canada, a number of EU members, and Argentina, Australia, Brazil, China, India, Indonesia, Mexico, Russia, Arabia Saudi, South Africa, the Republic of Korea and Turkey.

On the sidelines of the meeting, Minh had a meeting with Spanish Foreign Minister Alfonso Dastis, during which he voiced Vietnam’s desire to bolster the strategic partnership between Vietnam and Spain.

Dastis said that Vietnam is an important pillar in Spain’s relations in Southeast Asia.

Minh asked for Spain’s support in hastening the EU’s approval of the EU-Vietnam free trade agreement and the EU’s recognition of Vietnam’s market economy status.